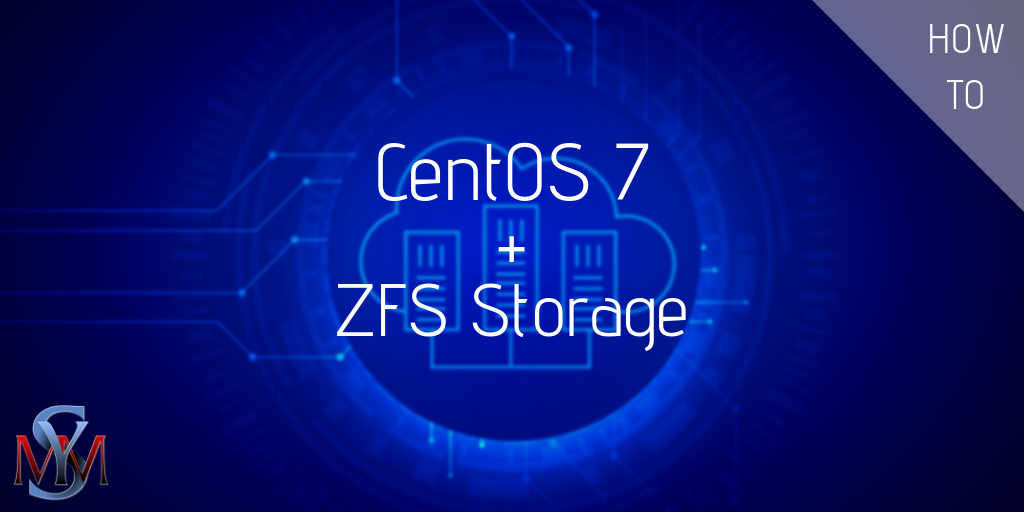 How To Install ZFS on CentOS 7

Developed by Sun Microsystems, later acquired by Oracle Corporation, ZFS is one of the most popular storage systems today. It was created by combining the file system and Logical Volume Manager (LVM). ZFS comes with some great enterprise-level features such as data compression, copy-on-writes, data redundancy, snapshots, error checking and many more.

ZFS was fully open source during Sun Microsystems but after acquiring Sun, Oracle reverted ZFS to closed source. In response, OpenZFS was born in 2013 to bring individual developer and companies together to continue maintaining ZFS in an open source manner. ZFS is not enabled by default in CentOS 7. In this guide, we are going to learn how to configure ZFS on CentOS 7.4 and above.

First, we need to check which version of CentOS is currently installed using the following command:

After the CentOS version is verified, we can add the repo of ZFSOnLinux using the following command:

DKMS and kABI are two ways ZFS module can be loaded into the kernel. If DKMS is used then if CentOS kernel is ever updated, the ZFS module will need to be recompiled again. But with kABI no recompilation is necessary. In this guide, we are going to use kABI. We can enable it by editing the ZFS repository:

The following content should be in the repository file where [zfs] is for DKMS and [zfs-kmod] is for kABI. We can see that the DKMS is enabled by default and kABI is disabled:

We are going to disable DKMS and enable kABI by editing the enable= in both sections as following:

With repository fully configured, we are now ready to install ZFS using the following command:

Reboot the computer to activate ZFS so modules can be loaded:

After rebooting is done, use the following command to check if the ZFS kernel module is loaded automatically:

If the module is loaded properly, we should see it as follows:

If for some reason the module is not loaded, we can manually load it using the following command and check again:

A ZFS pool combines drives together to perform single storage. Pools should always be created on disks which are currently not in use. So when the storage needs to be expanded simply add drives to the pool to increase overall storage capacity. This offers to scale without restriction.

There are three types of pools that can be created in ZFS:

Each offers its own sets of advantages and disadvantages. It is important to decide which type of pool is going to be used. Because once the pool is created it cannot be undone. In order to change pool, a new pool would need to be created, then migrate all data from the old pool to the new pool then delete the old pool.

This is the basis ZFS storage pool where incoming data is dynamically striped across all disks in the pool. Although this offers maximum write performance, it also comes with a price. Any single failed drive will make the pool completely unusable and data loss will occur. Besides the performance, the biggest advantage of Stripped pool is total storage capacity is equal to the total size of all disks. We can use the following command to create a ZFS Striped pool:

To increase the size of the striped pool, we can simply add a drive using the following command:

As the name suggests, this pool is consists of mirrored disks. There are no restrictions on how the mirror can be formed. The main caveat using the mirrored pool is we lose 50% of total disk capacity due to the mirror.

To create a mirror pool of just two disks:

To expand a mirror pool we simply need to add another group of the mirrored disk:

When adding another mirror group, data is striped on to the new mirrored group of the disk. Although it is rare, it is also possible to create a mirror of more than two disks:

ZFS offers software-defined RAID pools for disk redundancy. Since it is not depended on hardware RAID, all disks of a pool can be easily relocated to another server during a server failure. All Raid-ZX in ZFS works similarly with the difference in disks tolerance. The main difference between Raid-Z1, Raid-Z2 and Raid-Z3 are they can tolerate a maximum of 1, 2 and 3 disk failure respectively without any data loss.

To create Raid-Z1 we need a minimum of two drives:

To create Raid-Z2 we need a minimum of 3 drives:

To create Raid-Z3 we need a minimum of 4 drives:

When using any raidzX pool, it is important to keep in mind that, a disk loss puts the pool under heavy load due to data rebalancing. The bigger the pool, the longer it will take for rebalancing to complete.

Once a Raid-ZX pool is created it cannot be expanded just by adding new disk to it. In order to expand the pool we need to add another complete vdev. A vdev is a complete group of disks which can be standalone forming a pool or multiple vdevs forming a pool. For example, a Raid-Z3 consisting of 4 drives is one vdev. To expand the pool we need to another vdev of mirror, Raid-Z1, Raid-Z2 or Raid-Z3 vdev. Following command is to expand a Raid-Z3 with another Raid-Z3 vdev:

Note that it may take a while to achieve maximum read performance because ZFS will automatically copy most frequently accessed data to the Cache disk over time.

To import a ZFS pool which was created on another server:

How To Install and Configure Graylog Sidecar on CentOS

How To Install and Configure Graylog Sidecar on Debian 11

Feb 25, 2021 Databases 3254 SymmCom
Forked from MySQL, created with love by original MySQL developers, MariaDB is one of the…